Isn't it great when a plan starts to come together? When I began our garden last year, my main aim was to encourage wildlife by selecting plants which would offer a source of food and shelter. One year on, we are seeing a marked increase in the numbers of bees, butterflies and birds. Perhaps this is because of the weather and nothing to do with gardening, but when I go outside and find myself in a flurry of butterflies and I see them settling on plants which were selected to meet their needs, I feel certain that I have made sound choices. 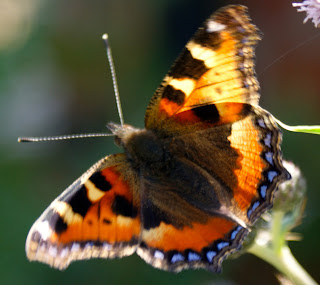 I garden organically; I have never gardened in any other way. If you should ever visit our garden, you will receive no apology for lawn weeds because we rejoice when we see bees enjoying flowering clover in our lawn and we tread very, very carefully!

Gardening for wildlife might be my main aim, but I am selfish enough to design our garden for my requirements too. I have posted before about my need for readable structure in the garden* and although I select plants for other creatures, I want to see them arranged in a way which pleases my eye. Happily, bees and butterflies enjoy plants en masse as much as I do.

The farmhouse garden is still far from mature - a budget blown on rabbit fencing put paid to any hope of planting big specimens - but it is beginning to do its job and we have a lively garden where we can enjoy a privileged, close view of the creatures visiting the plants.


I feel very strongly that our decisions make a difference and while we can’t encourage wildlife in if it isn’t within sensory distance, we can welcome visiting creatures with a delicious feast, somewhere to stay and a supportive environment for any offspring.


My next challenge is to try to ensure food and shelter for wildlife all year round and I hope you will forgive me if I return each month to this subject which is so important to me. I am fascinated to hear about any plants you have found to be particularly attractive to beneficial insects and other wildlife.  Meanwhile, I will grab myself a coffee and take a few minutes to enjoy the company of today's garden guests. 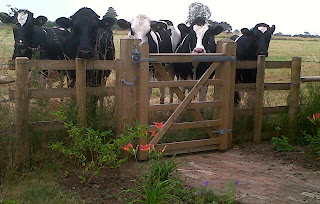 Many moons ago, inspired at a lecture by the doyenne of creative vegetable growing, Joy Larkcom, I designed and planted a beautiful patchwork quilt of cut-and-come-again salad leaves. As I watered in the last lettuce, I knew that this edible blanket of burgundies and greens would look even better once the plants had knitted together, so I postponed capturing my creation on film.

The next morning, before I left for work, I decided to take my morning coffee by my lettuce (as you do) and to my horror, I was met by bare soil and a few stumpy stalks. For unbeknownst to me, lurking under the canopy of the cedar tree was a hungry muntjac deer with excellent taste in salad leaves, but no respect for lettuce art. 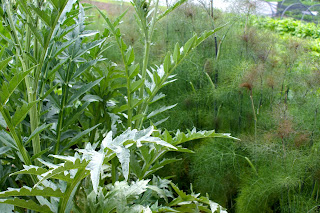 Since then, I have created pleasing, yet fleeting edible foliage combinations which have been enjoyed by rabbits, pigeons and caterpillars, but not slugs. You may recall that I blithely blogged about the lack of slugs in the farmhouse garden http://thegardeningshoe.blogspot.co.uk/2013_04_01_archive.html  well, I have had my comeuppance. Why wouldn't we have slugs in the farmhouse garden? Because there was finer fare around the corner in our new kitchen garden. 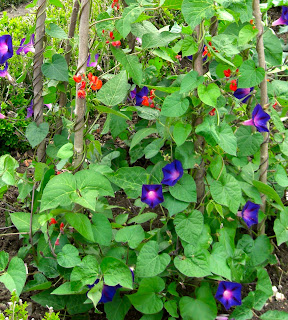 Having been raised in a hospitable household, my natural instinct was to offer my guests a drink. Being slugs, their chosen poison was beer. Ten little beer-filled containers were duly set out for the molluscy revellers and despite initial fears that I was creating a hugely popular gastropod gastropub crawl, the slugs have been merrily availing themselves of one beer too many and our veggies are finally showing signs of recovery. 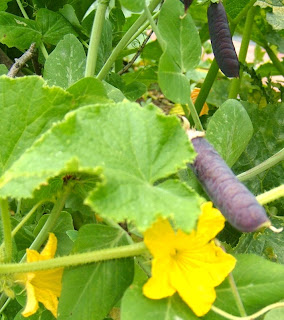 Growing food decoratively is a tricky business, because even if it survives the excesses of slugs, deer, rabbits and birds, we will eat it and in so doing wreak havoc on our edible scheme. Cut-and-come-again lettuces succeed in the world of food art because we can pinch the odd leaf here and there and not spoil our salad tapestry (it is a pity that no one told the muntjac about this valuable attribute of these leaves). 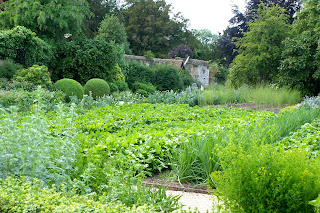 There are plenty of edibles which look great despite regular harvesting, but many crops simply look gappy. I have tried succession sowing and planting, intercropping and the occasional selectively placed rhubarb forcer, but these methods are too time-consuming for me at the end of a working day and a rhubarb forcer looks downright incongruous in the middle of a patch of onions. Consequently, I have been on the lookout for a solution and I think I have found it. Instead of seeing a gap in the garden; I see a meal I have enjoyed. Absurd as it might seem, this desperate attempt at reframing seems to be working. 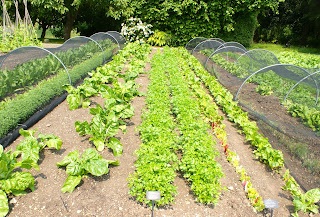 I finally stopped fretting about gaps in the veggie borders following a tour of the two acre organic kitchen garden at Le Manoir aux Quat’Saisons. Now I think, if they are good enough for Raymond Blanc, they are good enough for me. Of course, a two Michelin Star chef in my kitchen, waiting to prepare my homegrown veg would be splendid.... well... I need to fantasise about something as I offer a top-up of beer to the molluscy guests on a tour of my own rather less extensive, but equally organic kitchen garden.

P.S. If you have never read anything by Joy Larkcom before, I urge you to take time to look at her work. Her books introduced me to so many of the crops I enjoy growing today and I frequently revisit her writing when I am looking for inspiration.
The last two photos show the kitchen garden at Le Manoir aux Quat'Saisons, where the crops look great, but taste even better.    http://www.manoir.com/web/olem/le_manoir_gardens.jsp