I was hurtling through a food hall recently and was stopped in my tracks by this: 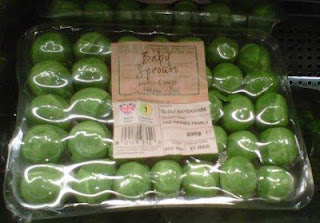 which is oddly reminiscent of this: 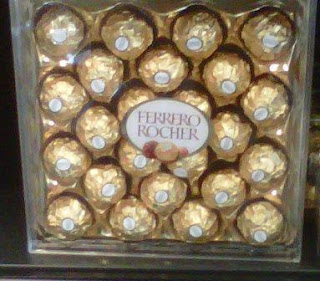 Which might have made for an interesting evening at the bizarrely-dubbed Ambassador's reception.
www.youtube.com/watch?v=4P-nZZkQqTc

What a thing to do with our gorgeous green-buttoned lovelies. Do sprouts need to be trussed up like chocolates to get us to eat them? Perhaps we are supposed to recline on our chaise longues, grazing sophisticatedly on our chocolate box sprouts, sipping gently on a glass of Champagne, whilst gazing serenely into the distance. It has to be worth a try.


While on the subject of sophistication, I must mention 'Thalia' - a gem of refined, elegant beauty. Slimline flowers, up to four per stem, unfurl gracefully and tantalisingly slowly (no bursting forth for 'Thalia'), to create gorgeous, white blooms. 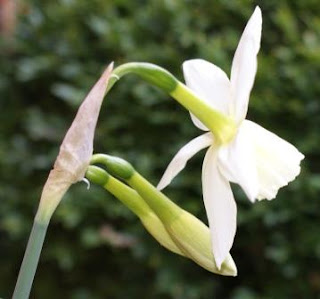 This daff performs beautifully in a slick, contemporary setting or in a more traditional scheme and will shine all the more brightly if placed next to dark foliage. Narcissus 'Thalia' is the full name and it looks great when planted in confident groups rather than dotted meekly here and there.

With this lovely sunny weather, the concept of lolling on a chaise, scoffing sprouts has been usurped by the garden bench as a drinking venue and it was whilst enjoying a sundowner the other evening, that I saw something I have never seen before. Sunset illuminating unopened daffodil buds. 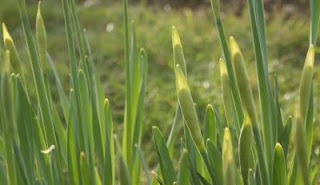 This daff, Narcissus ‘Best Seller’ might have been in flower in early March but for my inability to do anything on time - as chewed over in a past post, 'Imperfect Timing'. Happily, I am reaping the benefits of delayed flowering, following embarrassingly delayed planting. To think, if it wasn’t for my inadequacies, I might have missed this moment. Happy days.


I am so two-faced. I force my family to sit down every day and eat a healthy breakfast, while I sneak off to do something outdoorsy and stuff my face with large quantities of chocolate. I blame lack of time (impossible to eat yoghurt on the hoof), or the packaging of chocolate eggs in multiples of three (impossible to eat just one). But the truth is, I can’t stop myself eating chocolate for breakfast, or at any other time of day for that matter.


Bare-root plants have a habit of arriving when snow is forecast and these three were no exception. So they languished in our old threshing barn, where they were wrapped lovingly in hessian and watered until the snow had melted and I finally found the time to lavish on planting them (a task which, like filling out a tax return or washing up, looms large in your mind, but never takes as long as you expect it to).


Prunus serrula won a place in the garden, not only because bees enjoy its clusters of little white flowers which nestle among the emerging green leaves in Spring, but also because it ticks all the year-round interest boxes. Willow-shaped leaves turn yellow in Autumn; there may even be small fruits; then to cap it all, in Winter, after the leaves have fallen, the beautiful coppery-red bark of Prunus serrula gleams gloriously in the sunlight. It is this bark that is the cause of the extension to my 'shouldn’t, but can’t help it' list.


Of course you shouldn’t peel the old bark to reveal the gorgeous, glossy, shiny, smooth, almost burgundy, can’t-keep-my-hands-off-you new bark, because it slows down the natural shedding cycle of the tree and increases the risk of infection. If Prunus serrula could write gardening manuals, human bark-peelers would surely find themselves in the pest section. But anyone who has ever walked near a tree with peeling bark knows the dilemma. It’s like an annoying scab on your skin; not picking at it is more than flesh can stand.

The newly planted trees in the orchard also have bark issues. Not from human pests, but from our beautiful four-legged friends. I am not one to cast aspersions and I certainly don’t want to be sued for libel by deer, but I disturbed a gang which looked very similar to this one in the orchard just last week. 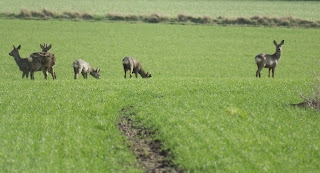 Typically, they ran off before I had time to find my camera, but I photographed this handsome group in my neighbour’s field yesterday. It may be circumstantial evidence, but for once it isn’t me who has been picking at tree bark (Prunus serrula might reasonably suggest otherwise).


Thankfully, the bark-chewers haven’t tucked into every tree in the orchard and have left the  newly-planted ‘Peasgood’s Nonsuch’ apple untouched. It has to be one of my favourites with delicious, huge, juicy, dual-purpose fruit. The culprits have also avoided the plums and quince, so all is not lost. Time to do something outdoorsy like pruning away the damage. I'd better take a chocolate egg, or three.

The Gardening Shoe
Posted by Sarah Shoesmith at 14:51 2 comments:

I meant to enter the blogosphere six months ago and I am not convinced that this is a case of better late than never. Sometimes never is a very good thing. However here we are and here are some vibrant tulips to wake you up if you’re planning on wading further into this post. 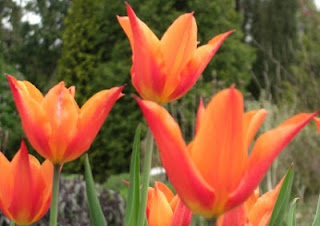 They remind me that I never seem to do anything on time. Spring bulbs fester on the dining room table for months on end, only to be evicted somewhere less salubrious for the festive season, before guilt wins through and the poor bulbs are subjected to the now-or-never January planting frenzy.

Bare-root hedging plants which have been heeled-in for a month now, will shortly be lifted and placed in pots in the full knowledge that I will plant them at some inappropriate time later this year. Yes, I know I could plant them directly in the garden instead of pots, but what are the chances that the soil will be prepared in time? Happily, the plants seem to be quite accommodating. Bulbs flower late, but that in itself can be a novelty.

It is a similar lack-of-success story with diaries and journals. Every January without fail, I start a garden journal. Every February without fail, I stop. How do I know this? Because I found a decade of diaries when we moved to Norfolk. If some future generation were to dig up my garden journals (not that I have got round to creating a Blue Peter-style time capsule, obviously), they might reasonably conclude that we hibernate for eleven months of the year, having spent the whole of January rabidly planting bulbs whilst berating ourselves for being so disorganised.

Even a seasoned procrastinator like myself must get on with life eventually though and this year will be different. Admittedly, the journal (a red-spotted supermarket bargain) ceased to exist during the third week in January (early even by my pathetic standards), but this year I will create a new wildlife garden here and it will make a difference. I have already made a start. New trees have been planted (of which more next time) and mixed hedging is going in, even if not in a perfectly timely fashion.

I have high expectations for 2012 - even if it did start a couple of months before I was ready for it.