Stephen Fry, Sexy Words and a Bundle of Autumn Roses

Some words are more fun to say than others. I have yet to meet the person who can say that flirty kiss of a word “plinth” without sounding sexy (which makes buying a kitchen more fun than it should be). Miranda Hart apparently savours a “slash” and Stephen Fry allegedly relishes a “bundle”. I, on the other hand, enjoy raising my eyebrows, outstretching my arms, bowing my head, and indulging myself in that glorious musical tongue-roller of a word with the cheeky staccato ending: "remontant" (it's even better when you curtsy as if you've just enjoyed a jolly good Gavotte). 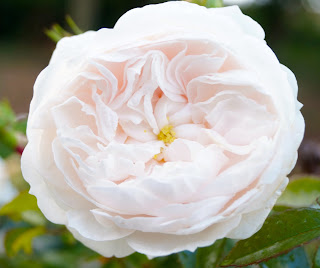 It’s not just great fun to say. This word describes one of the more alluring characteristics of plants: their ability to flower more than once in a season. It is used particularly in conjunction with roses; and at this time of year, remontancy (not such a fun word to say) is more obvious than ever. 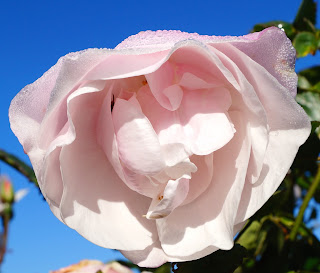 'Souvenir de Saint Anne’s' is a very highly scented bourbon rose which is attractive to bees. I actually think that it looks better now than it did in summer.


Rosa MacMillan Nurse has flowered all summer long and is showing no sign of stopping. It is scented, very disease resistant and tolerates some shade, which is as well, since it doesn't get any sun in my garden until lunch. This modern shrub rose is said to attract bees and other wildlife. I haven’t seen many bees visiting the flowers; they look quite hard work for a bee and in any case, the bees are probably sidetracked by the rose's underplanting of Nepeta racemosa 'Walker's Low'. If you live outside the UK, you might not have heard of our wonderful MacMillan Nurses. These specialist palliative care nurses who support those affected by cancer are funded by the charity, MacMillan Cancer Support.

Another scented modern shrub rose is 'Rose Ball'. Clusters of powder pink blooms have been adorning one of our sunnier borders all summer long. It is attractive to bees and is still flowering beautifully.

Rosa x odorata is a very old China rose. It is highly fragrant, tolerates some shade and is attractive to bees.


Elsewhere in the garden, rich autumnal hues reign, but in the borders where roses mingle with gentle blues, there is the sense of an English garden preserved in summer. I love these roses for helping to make October look like June. I also love them because they are giving me plenty of opportunity to indulge in saying my favourite word. Go on… you know you want to. Arms stretched, curtsy and... "remontant".


I am linking to Garden Bloggers' Bloom Day, which is hosted by May Dreams Gardens. It's well worth a visit to see what is flowering around the globe at the moment http://www.maydreamsgardens.com/

Gardening for Wildlife in a Courtyard

Sometimes a place looks as inhospitable to wildlife as it is possible to be. When I started work on converting a boar pen into a courtyard last year, there was little to recommend it to our wilder friends.

The 17th century threshing barn which formed one wall to the boar pen was converted into our home, and the farmyard is in the process of becoming a garden. A biodiversity survey undertaken prior to the build concluded rather damningly that "this barn site proved to have quite a low Biodiversity presence and potential". I immediately decided that I would garden with wildlife in mind to see if it could make a difference.

I did wonder if a courtyard was capable of attracting much wildlife. This area is treated like part of our house as there are rooms around it which all require access. Paving is a necessity here, but it didn't all need to be paved so some concrete was removed to create borders.

Having barrowed in a load of topsoil, I popped in plants which would be particularly attractive to pollinators; and guess what? The plants did their job. Walking along the garden path is a joy because of all the butterflies and bees. 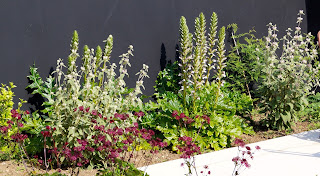 I might have selected plants for pollinators, but other wild friends had their own ideas. Acanthus mollis proved to have broad wildlife credentials. A magnet for pollinators in summer and a hiding place for minibeasts in autumn (I don't cut back the flower stems as they make superb bug hotels), it also provided valuable cover for this young lady who hatched 11 ducklings under its lush foliage.

The courtyard now has a rather splendid resident newt and we are being visited by an increasing number of birds, including a cheeky pied wagtail which frequently perches on my office door handle. 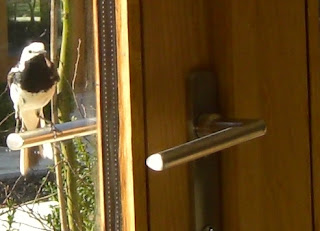 This is a very new garden. I still haven't finished planting it, yet it is already attracting a range of creatures. The farmyard might once have had quite a low biodiversity presence, but even the most unlikely places can become a haven for wildlife.

I am linking this post to Wildlife Wednesday at http://mygardenersays.com/ Why not pop over there to see some beautiful photos of wildlife in gardens elsewhere on our wonderfully diverse planet?
Posted by Sarah Shoesmith at 10:39 49 comments: