Making a Garden for Wildlife

I was wielding the hoe through a recently planted border (AKA weed seed magnet), cursing taproots and apologising to dormant tulip bulbs wrenched from their summer slumbers by my frenzied hoe-flailing, when a lady stopped by and asked if I might give a short talk to the local gardening club about the development of the gardens at Le Grys Farm. Uncertain as to whether she had heard me begging the bulbs' forgiveness, but fairly certain that her sudden appearance had caused me to yelp in surprise (I imagine the bulbs probably did likewise when they were dragged from the soil moments earlier, if indeed bulbs yelp), I agreed to speak and immediately set about wondering what on earth this lady thought I might have to say.


I have blogged in the past about gardeners’ minds being fixed in the future* and as I watched the lady leave, I realised that I had been so busy planning the next area of garden that there had been no time to appreciate the more established borders. Thanks to that lady, I found the time to look at the garden and to reminisce on what was originally here.

When we bought Le Grys Farm in 2000, the 16th century Farmhouse had been empty for 20 years. There was electricity in just one or two rooms and there were no bathrooms, which was marginally inconvenient as I was pregnant with twins and the nearest public loo was 2 miles away. There was a Wisteria, which I can only describe as pollarded to within an inch of its life. Obviously this did little to aid the bathroom issue, but it did fill me with hope that we might one day have a garden. The only other plant in the garden was a walnut tree which was too young to fruit. I left the walnut to continue its childhood, put up wires for the Wisteria and set it free (in as much as anything trained along a wire is ever free), then I planted Old English lavender across the front of the house, had the lawn seeded and a gravel drive put in. That's it. We didn't live here and everything had to be very easily maintained in our absence.

Over a decade flew by before we were able to move to Norfolk. Clearly a garden comprising a walnut, a Wisteria and a lavender hedge is hardly going to satisfy a gardener's desire to grow things, so I set about creating the first of a number of gardens here. The walnut was finally getting its act together on the fruiting front, so I sited the garden paths around it. I propagated and purchased plants to add to those I brought with me: Geum rivale which had been dug from my aunt’s garden and had flourished in two of my gardens since; and Salvia uliginosa, which I bought at a plant fair and hung from the back of my baby daughter’s pushchair. That daughter is now 12 years old, and The Farmhouse Garden is three.


When we purchased the farm, there was an agreement with the vendor that he would have use of the farmyard and some buildings until 2010. In actual fact, they were used by him for a couple more years. By then, an ecological survey had revealed that there was a low biodiversity presence in the farmyard. I decided that this had to change. Starting with my plant selections for The Farmhouse Garden, I would garden with wildlife in mind.

Apart from providing shelter and sustenance for wildlife, The Farmhouse Garden has to be easily maintained within four hours a week, for it is a space to be enjoyed by holiday makers. Quite rightly, guests at The Farmhouse want their family pet to have a holiday too, so dogs are welcome. The lawn becomes a space for ball games, bouncy castles and barbecues so I cannot afford to be too precious about its state, or that of the plants. Toddlers will toddle through borders; dogs have a knack of leaving the path, so plants must be resilient to the rigours of family life. They must also benefit wildlife, be beautiful for the guests to enjoy, and not cost the earth to replace.

Propagating and shopping for plants is always a pleasure. Making a garden is a privilege; sharing that garden with guests and wildlife is a joy. Three years after beginning the first of the gardens here, the days of wondering where the wildlife is are well and truly over. There are pollinators and birds aplenty. We share our gardens with bats, owls, newts and ducks; and thanks to extensive fencing, we see, but are rarely troubled by rabbits, hares and deer. We still have a long way to go in making our gardens here, but now that I have taken the time to look at The Farmhouse Garden, I am surprised to see that we have already come a long way. 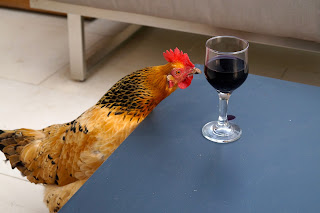