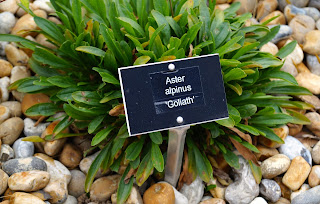 If Bees and Butterflies Gardened

1980s fashion is making a comeback. Incredible though it might seem, one of my daughters has proudly claimed ownership of some of my old clothes!
30-year-old 501s no less, or should I say pre-loved vintage jeans? Suddenly I feel in tune with today’s teens, which is a welcome change, because usually I am at odds with them due to my lack of Kardashian general knowledge and a prehistoric preference for gardening blogs over make-up vlogs. 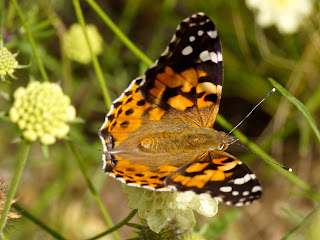 Sometimes I find my tastes at odds with pollinators too. I may bill and coo over a spectacular bloom, but the pollinators might have other ideas, lavishing all their attention on a gentler, quieter flower. These plants are easy to overlook, especially if they bloom all summer and continue into autumn with little intervention from the gardener. One such long flowering perennial is Scabiosa columbaria subsp. ochroleuca. For the past fourteen weeks, bees and butterflies have been lavishing their attention upon its flowers. Fourteen weeks! And it will continue to flower its socks off well into October. 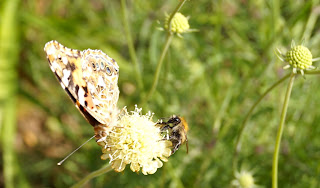 It is a dainty plant which prefers sun and well-drained soil. Masses of delicate primrose flowers are held aloft grey-green filigree foliage by wiry stems which sway gently in the summer breeze, yet shrug off autumn storms and torrential rain. It isn’t huge; it reaches just 50-60 cm tall (20-24"); and it may be quiet, but it is tough. 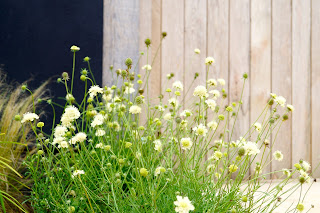 I left this scabious unwatered in dry weather this year and it thrived irrespective of my lack of care. I have a number of these plants in a demanding area of our garden: the carpark. It is unfenced, so deer and rabbits can come and go as they please. They cause damage to other plants, but they have never touched this scabious. 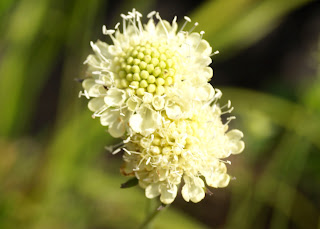 I grow it amidst a sea of Stipa tenuissima because the border gets buffeted by fairly lively wind. Since there is little point in fighting the weather, I have celebrated its excesses with grasses and scabious. Scabiosa columbaria subsp. ochroleuca is a pretty little thing. I love looking at it every time I park my car; yet it is the flurry of pollinators around the flowers which truly drew my attention to it and helped me to appreciate the huge contribution this quiet little plant makes to the garden. If bees and butterflies could garden, they would surely grow this plant.

I am linking with May Dream Gardens to celebrate Garden Bloggers' Bloom Day. Why not head over there and see what else is flowering today on this wonderfully diverse planet?
http://www.maydreamsgardens.com/

The Trouble With Japanese Wineberries

A friend was recently bemoaning his lack of wineberries. I understood his disappointment. While my Japanese wineberry has always produced snackable quantities of fruit to sustain me as I ramble around the kitchen garden, berries have never made it into the kitchen where they might be arranged in a dish and adorned with double cream, or even cooked into some glorious wineberry pudding. 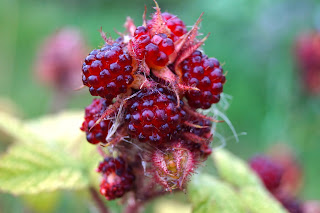 The solution to this dilemma came during my summer holiday to Croatia. My absence from our plot gave the Japanese wineberry an opportunity to build up a decent quantity of fruit for me to harvest. Clearly this is a problem with wineberries: it is impossible to walk past the plant without grazing on the ripe fruits. I look forward to hearing if my friend was met by a wineberry glut when he returned from his summer holiday. If so, I hope that he, like me, celebrated by adding some to his Sunday pud. Below is a pudding I thought I would never eat: apple and wineberry crumble, made possible by my absence from the garden. 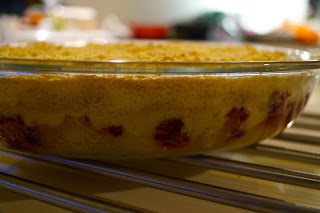 On a more serious note (as if the creation of my Sunday pud isn't serious enough), Japanese wineberries have placed me painfully on the horns of a dilemma. On the one hand, I am all for a plant which looks good in winter and offers protection to wildlife and food to me; on the other hand, Japanese wineberry is invasive in some areas of the world. 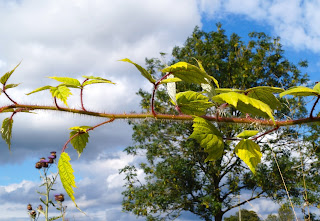 Actually, I am perched on the horns of two wineberry-related dilemmas (this is truly an uncomfortable post). Invasiveness is one; the other is that while I garden for wildlife, I don't like my food being nibbled by anyone other than me. Joey not sharing food in Friends* springs to mind (which is unsurprising as my kids watched 236 episodes this summer... well, it did rain... a lot). If birds eat the fruit in the kitchen garden, I get upset. The developing fruit on a Japanese wineberry is protected by a hairy calyx, which makes eating the fruit trickier for birds, which means more berries for me. The birds here have plenty to eat: there are the plants I grow for them, plus the seed in the feeders, the chicken food when the chickens aren't looking, not forgetting the hedgerows, the windfalls in the orchard and some carefully selected weeds. The birds will not go hungry, but I do feel a bit mean about not wanting to share my food with them.

The good news for gardeners in our rainy isles is that I have found no reference anywhere to Japanese wineberry (Rubus phoenicolasius) being invasive in the UK. At around 2 metres, it is not a small plant, but it can be trained artfully against a wall or fence, or left free-standing with its stems arching hither and thither. Either way, it rewards us with year round interest: pretty white-pink starry flowers in early summer are followed by glistening burgundy berries in August. The leaves are bright green with white undersides and the orange-red bristly stems seem to glow in the low winter sunlight. 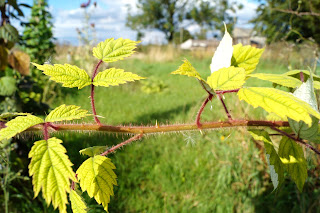 In my humble opinion, wineberries taste pretty similar to raspberries, but with a bit more zing. They are easier to maintain than raspberries (my wineberry hasn't walked anywhere, whereas the raspberries are taking great strides across the kitchen garden). Like summer fruiting raspberries, wineberries fruit on one-year-old stems, so cut the old brown stems down to the base and leave the young pink-orange ones for next season. If you are thinking of planting one, now is a good time. Designwise, try to site it where the stems will catch the winter sun, but where it won't dry out. Of course, like most fruits, it has its pests. The most formidable being the grazing gardener. The remedy is a gardener's holiday; about a week should do it.