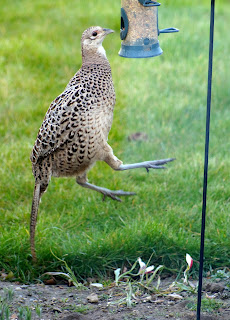 According to my daughter (who was born in the twenty-first century and is therefore an expert in these matters), I have vlogged. It happened because I thought that you might like to hear the sound of an English Bluebell wood. 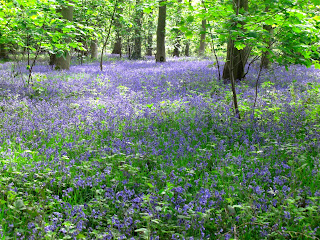 Vlogging has its shortfalls. There appears to be no share button for scent. In the absence of virtual scent, you might wish to create your own. Bluebell woods are wonderfully fragrant, but the scent is subtle and doesn't knock you sideways. If you have a few hyacinths to hand, remove them to another room and leave the door open, then place a pile of damp dirt and the odd bark chipping by your computer. Olfactory experts might describe overtones of this and undertones of that, but as far as I'm concerned it's an ambrosial dirt/wood/floral fragrance.

Please note that considerable quantities of coffee and cake were consumed in the making of this video, so it would be entirely appropriate for you to pop the kettle on. The video doesn't last long, so in the interests of indigestion avoidance, you might want to hit the cake while it's loading.

When I was six years old, I loved to tiptoe quietly into the garage to peek at the silhouettes of baby blue tits in the bird box my dad had built into our garage wall. The back of the box was glazed and covered with brown paper which gave the birds a sense of privacy while allowing us the opportunity to see something of their lives. My dad died the following spring, but the seeds of my fascination with the natural world were already sown. 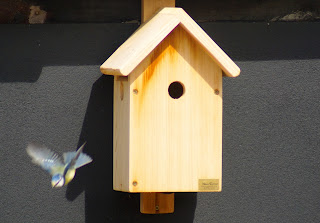 Nowadays we don’t need to head into the garage to see silhouettes of chicks in a nest. For Christmas I received a bird box with a camera in it. I suspect that the gift is part of a cunning plan to encourage domesticity as the nesting box is sited directly opposite the kitchen window under which there is a sink. Since the sink is required to fill the kettle, the domesticity plan has backfired to the point that far from motivating me to attempt kitchen chores, there has been a significant increase in the quantity of time I spend sitting down. I have always drunk coffee on the hoof, but if there is any activity around the bird box while I am filling the kettle, I fire the remote at the television, plonk myself into a chair and ogle the nest while enjoying a lovely warm drink and wondering what Dad would have thought of this wireless camera bird box.
The most astonishing accomplishment of this piece of technology is that it has caught the attention of my own offspring. Instead of the usual fare they enjoy on television, they have been spotted watching nature. Out of choice! Surely this is a healthy form of screen time?
From the comfort of the kitchen we have also been watching over a mother who hatched 11 ducklings. The nest is in the lavender which I have yet to cut back after flowering last year. I don’t cut back plants until spring because of the shelter they offer to minibeasts. I hadn't considered that the same plants might offer shelter to much larger creatures. Of course, my lavender tends to fall apart more quickly than it would had I shorn it after flowering, but it is easy to strike cuttings so I always have a ready supply. The courtyard where the ducklings hatched is a former boar pen. In the two years since it was converted into a garden, 22 ducklings have made their way into the world under the cover of the plants. 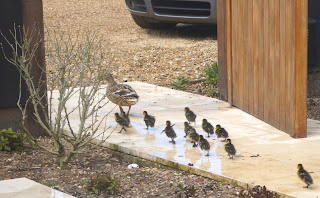 The garden feels like a dating disco. Our feathered friends are busily pairing off and doing the bird equivalent of The Birdie Song while dancing around their handbags, or in the case of Mr & Mrs Pheasant, tiptoeing through the tulips, (aptly named Tulipa 'Night Club'). At this rate - and with any luck - we will be inundated with offspring!
There is a baby boom in my office too. Since I don't have a greenhouse, the office floor must double up as a nursery. Butternuts, tomatoes, peppers and Cosmos are jostling for light and waiting impatiently to fledge. It is hardly the ideal start for a plant, but they are safer indoors than in the cold frames where they would become frazzled with frost in no time. I rather like sharing my office with them; I only wish that the greenfly hadn't followed them in. The office greenfly are clearly very happy with the food and shelter on offer as they are procreating like it is going out of fashion. One solution will be to bring in the ladybirds. This is all putting a most unlikely slant on the notion of a busy day at the office.

I am joining with Wildlife Wednesday at https://mygardenersays.com/ Why not pop over there, grab a drink and spend some time marvelling at the wildlife in gardens around the globe?