I spent much of my childhood viewing gardens upside down. If I wasn't careering around the lawn perfecting cartwheels, I might be socialising over a weather-related handstands game which was snappily named Snow, Rain, Thunder, Lightning. The rules elude me, but I do remember that a handstand with one leg at a jaunty angle signified a lightning fork. 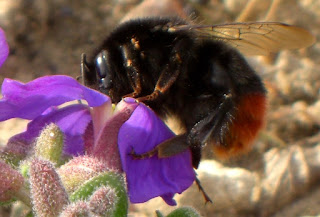 When my best friend and I were feeling lazy, we would dangle upside down from the frame of the garden swing; she on one side, I on the other, putting the world to rights for hours on end and wondering where Speedy my tortoise had scurried off to while we were chatting (he wasn’t called Speedy for nothing). On the rare occasions when we weren’t upside down, we would not have our feet on the ground. Why would we when we could be rockery hopping? This involved skipping from one stone to the next in the rockery, while honing our multitasking skills by having a conversation about something deep and meaningful like Abba, all while avoiding the toad which sheltered in a crevice hidden by Aubretia. 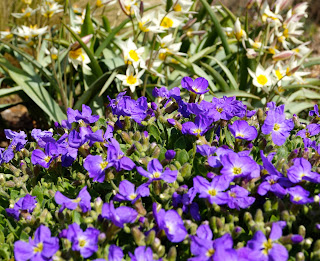 Aubretia was arguably the most ubiquitous plant of my childhood. In springtime it would be romping over rockeries and clambering over walls in the suburb I called home. Then rockeries fell out of fashion and Aubretia became the subject of mockery; the butt of jokes from plant snobs. It is highly likely that the demise of Aubretia coincided with the point at which I found my feet, gave up tumbling across lawns and became an upright citizen. Last spring, as an act of rebellion against plant snobs and the all-too-persistent passing of time, I decided to relive those glorious days of yore by growing Aubretia and attempting a handstand. Needless to say, one was more successful than the other. 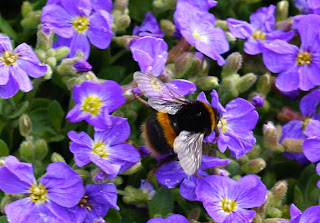 Aubretia is a top bee plant. I had toyed with the idea of growing it for a while, but because my garden is set in a flat landscape, with no rocks or walls over which Aubretia might scramble, I was concerned about where I might place it. I could have popped it in a pot and left it to escape over the side, but I keep very few plants in containers as I find them too time-consuming. I have no memory of seeing Aubretia growing anywhere other than over and down the side of things, so it was with more than a little hesitation that I placed it in a border. What on earth was I thinking? Aubretia is fabulous in a border! Instead of long (and quite frankly lanky) curtains, it forms a neat cushion. When it comes to garden soft furnishings - and if you want matching curtains and cushions - this plant is a winner! 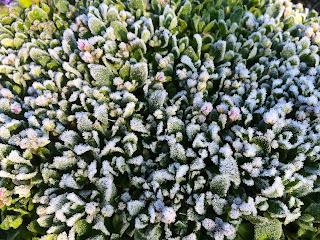 I grow it in an area which was once a gravel drive. The soil is thin, impoverished and alkaline. The site is the most inhospitable part of the garden. It might face south, but it is also a frost pocket which can be exceptionally windy. Despite this, Aubretia flowers shrug off the frost and the plant holds itself together, blooms for weeks on end, and is a hub of bee action on a sunny day. Clipping it after flowering keeps it neat and tidy. It really is a valuable addition to my borders and leaves me wondering why on earth a plant of this calibre was so badly maligned? 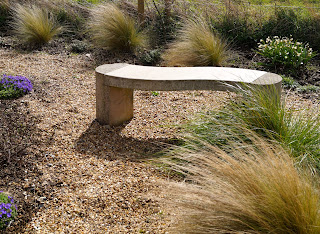 I would love to tell you with confidence that I purchased plants from the Cascade Series, but since I am relying on my memory and the plants are cascading nowhere, I am happy to be corrected. It is unsurprising that I mislaid the plant labels given the second part of reliving my childhood. I am no Beth Tweddle, but I gave it my best shot and my children were in awe of my handstand abilities. Of course, those might have been looks of horror on their faces, but for reasons of self-esteem, I will stick with awe. Despite reaching the dizzying heights of an almost perfect handstand (dizzying being the operative word - it took quite some recovering from), I shall not be attempting another handstand in the near future, not least because I swear it took a full week for all my internal organs to work their way back to where they started. 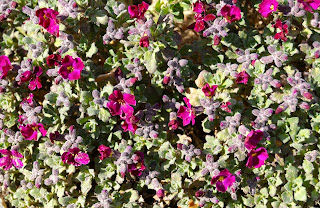 Clearly I made a slight error of judgement in believing that I could still achieve a handstand with any level of dignity; the garden fashionistas on the other hand made a massive mistake when they were so downright dismissive of an excellent garden plant. I am delighted to welcome Aubretia into my garden; it certainly gets the bee seal of approval. Garden fashions have a lot to answer for.