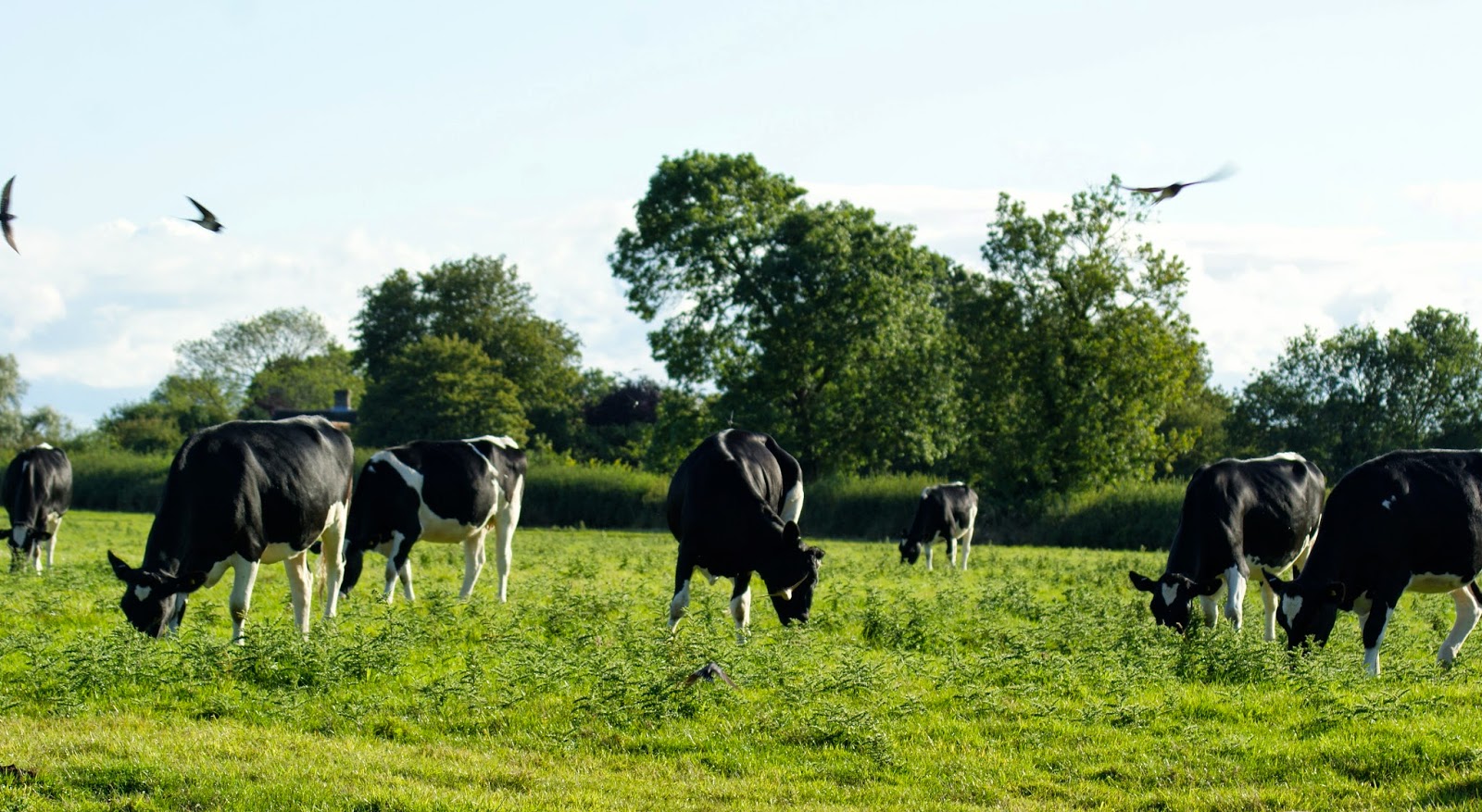 Gardeners are an optimistic bunch. If a crop or plant doesn't succeed in one growing season, we reason that we can always try again next year. Eventually, after another year (or years if stubbornness and tenacity are combined with our natural gardeners' optimism), we might decide to move on and when we do there is usually something new, more vigorous, sweeter, higher yielding, more floriferous, taller or more compact to try, all thanks to the huge amount of work involved in breeding, selecting and trialling plants. 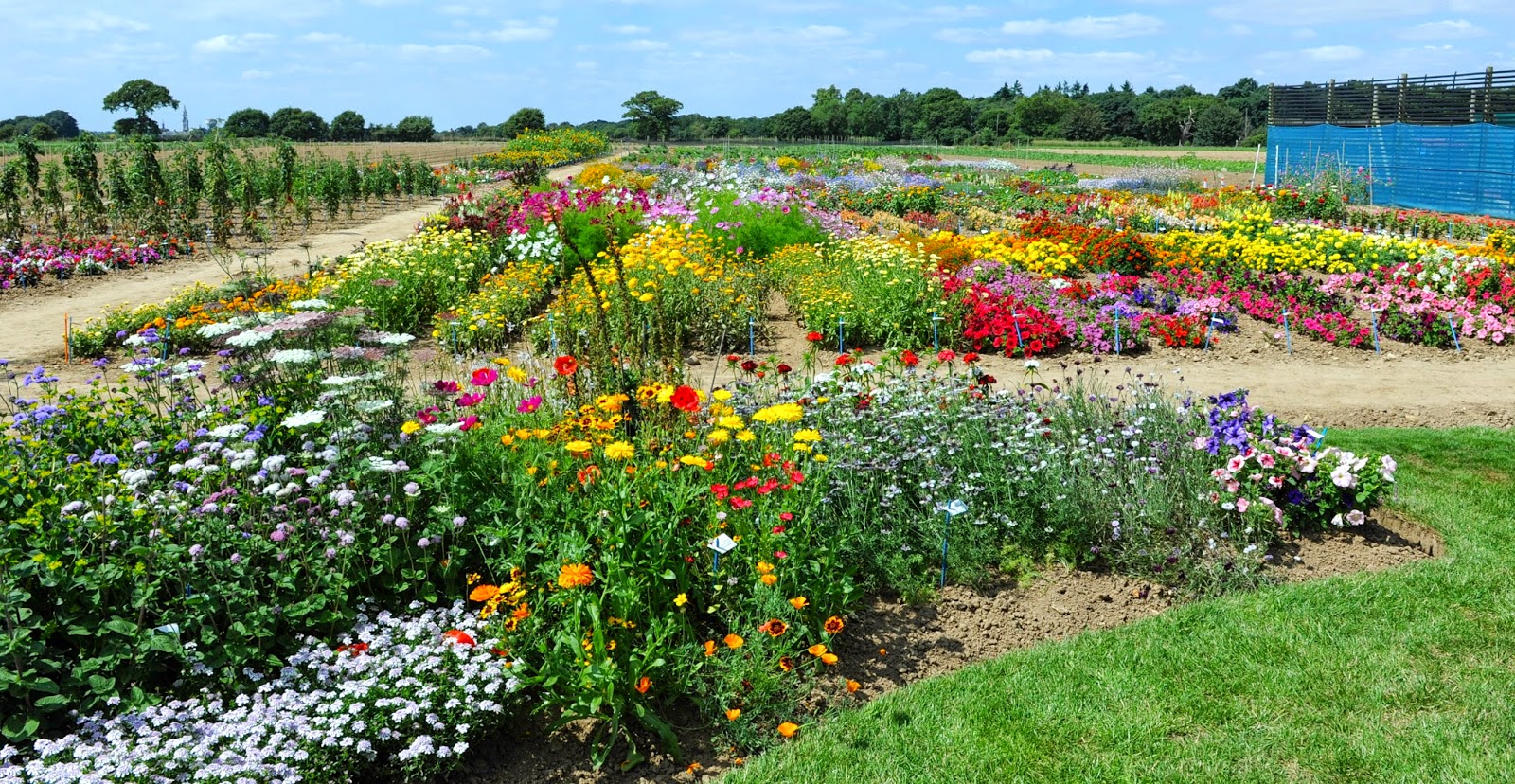 I had the immense pleasure of touring the Thompson and Morgan trial site last week. The remnants of Hurricane Bertha had swept across this secret location the day before and threw hail and thunder at us while we were there, yet the Delphinium looked splendid. These glorious Delphinium are from Terry Dowdeswell in New Zealand and they are strong growing, blackspot resistant and have well-spaced flowers. 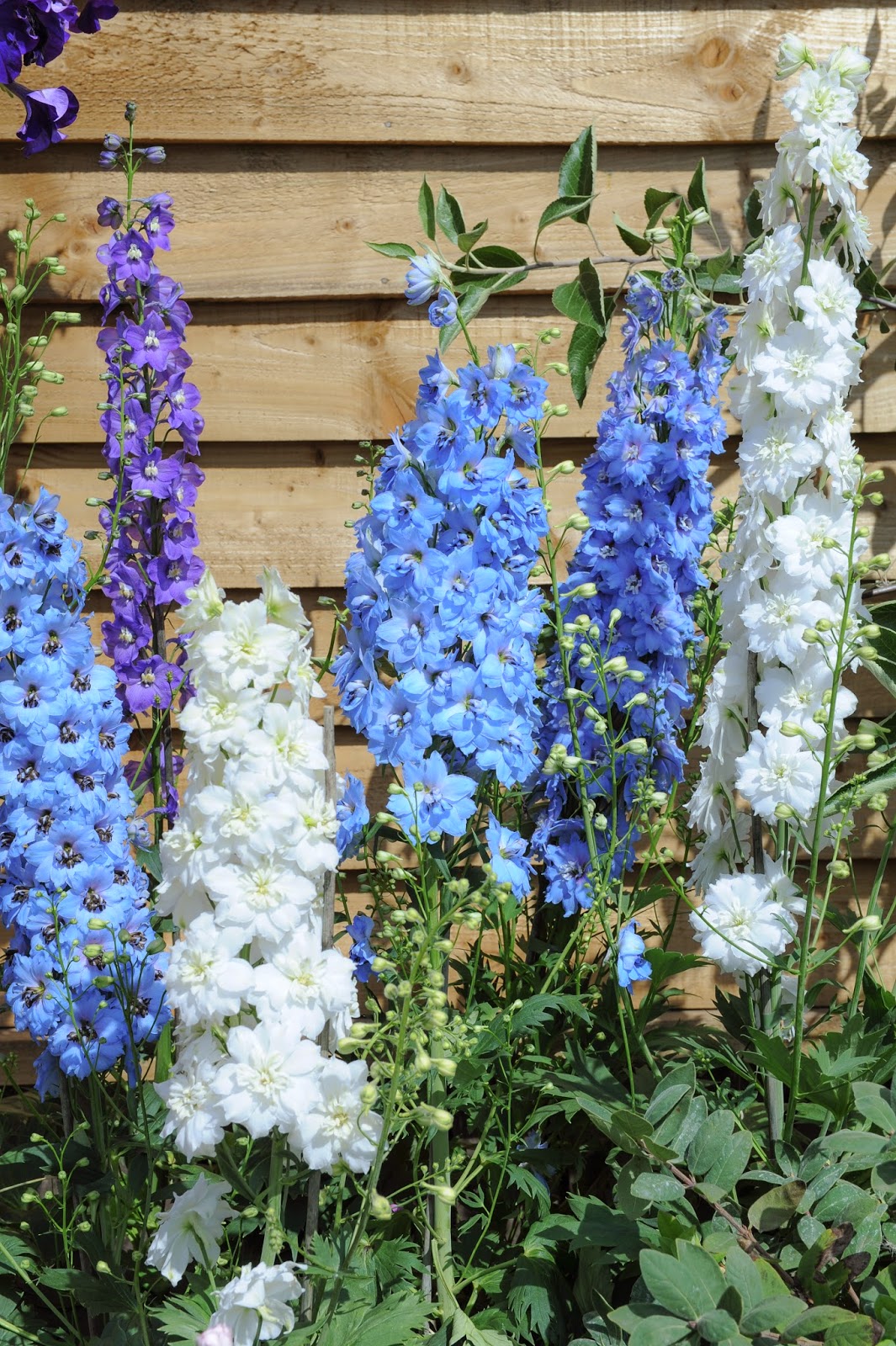 The site is home to an extensive collection of plants being trialled in containers. These include shrubs such as Buddleja 'Buzz'™ and Hydrangea paniculata ‘Sundae Fraise’ which look great in pots. Needless to say, this is a popular spot with butterflies. 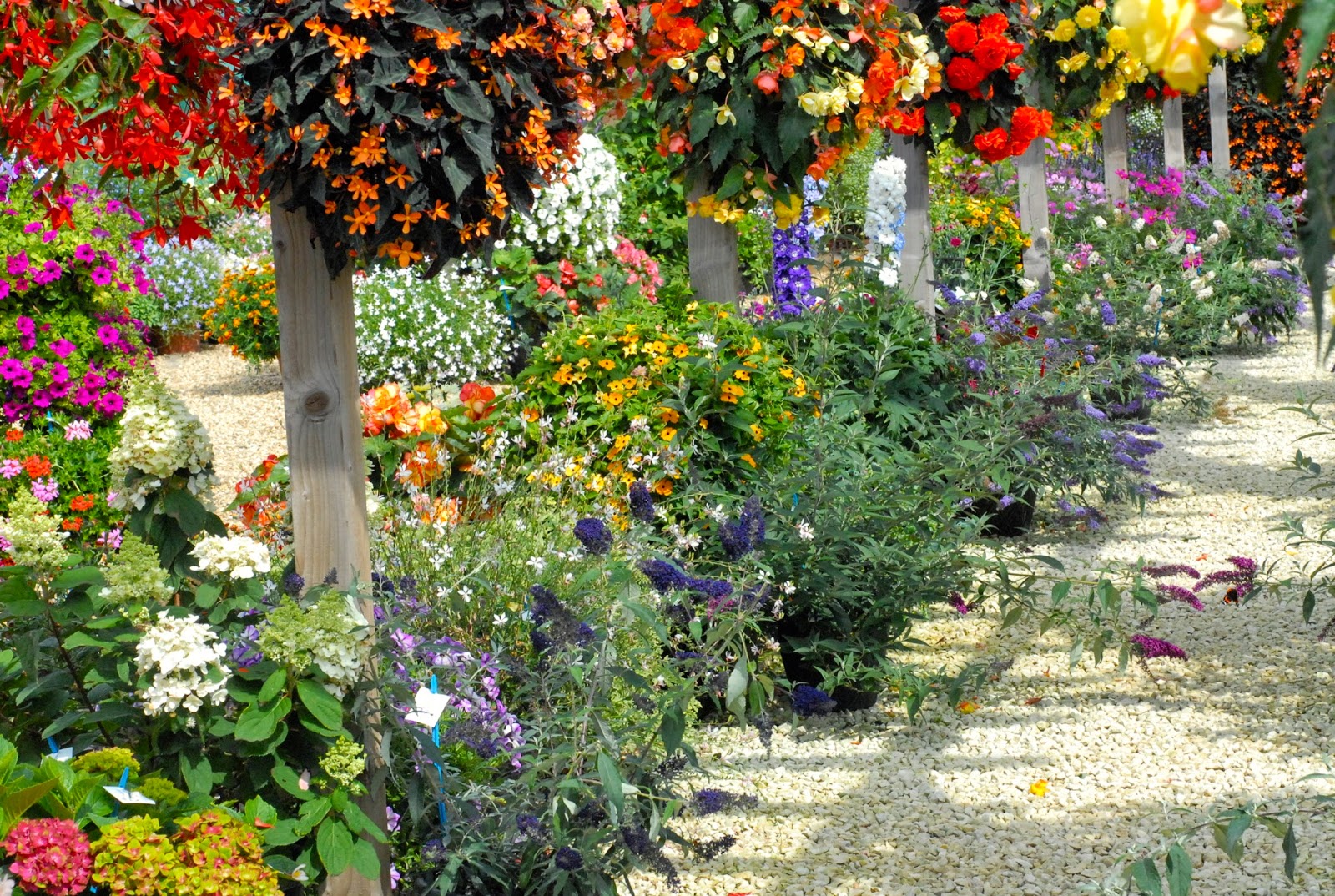 I love Limonium vulgare. We see it growing in the dunes on the beaches in Norfolk and I grow it in the farmhouse borders. The problem for me is that it is so insignificant in the garden setting that it is easy to overlook. Limonium ‘Blue Velvet’ has none of these shrinking violet tendencies. It is beefy without looking as if it is pumped up with steroids and although it is a good house plant, it looks wonderful outdoors. I sincerely hope it makes it through the trials as it has been catapulted to the top of my wish list. 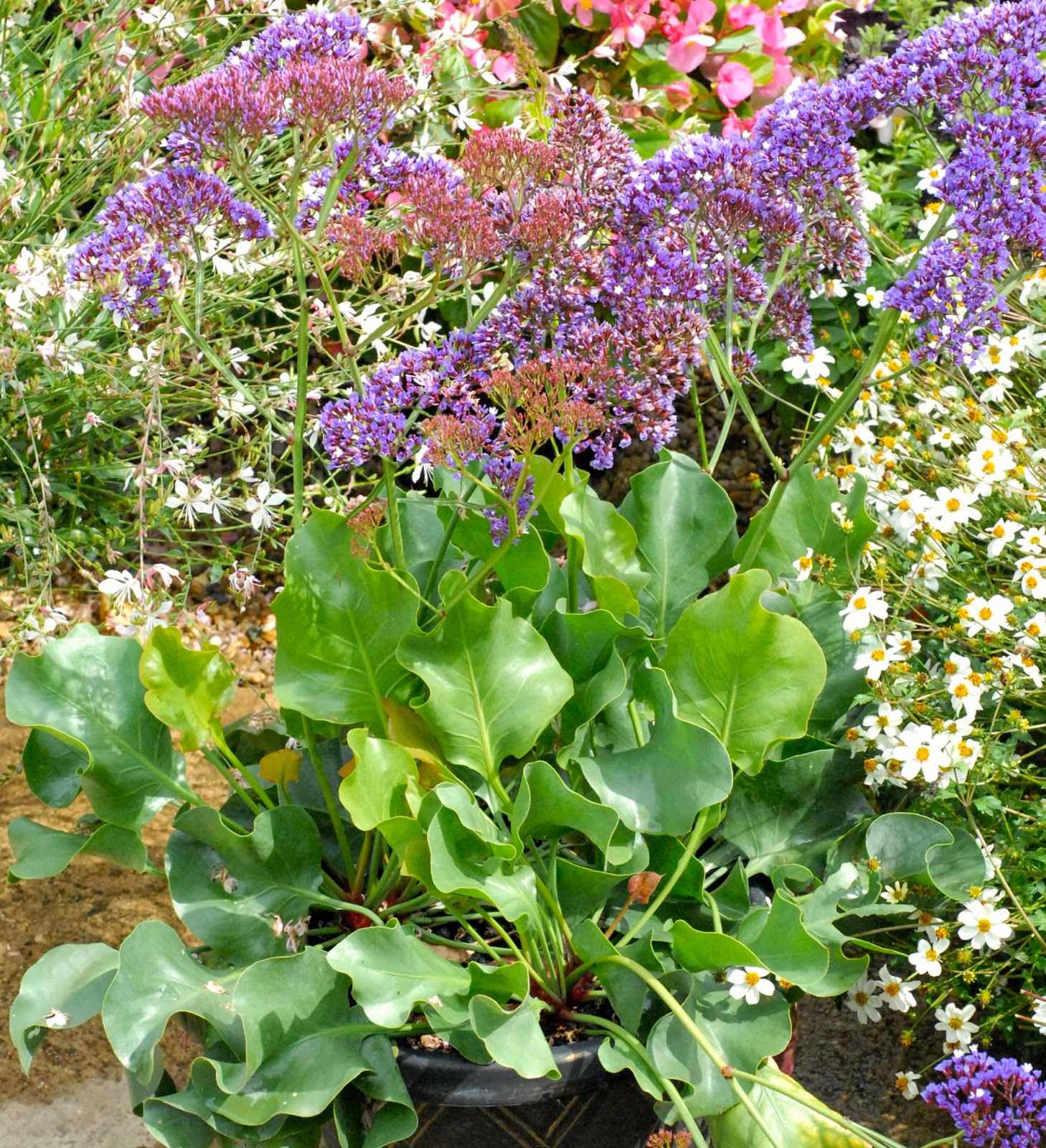 The container plants at the trial site are given a liquid feed every other day. At the other extreme, those growing in the field are watered when they are planted and then left very much to their own devices. The field, with its rows of crops and flowers battling with the elements is more akin to the growing conditions in my garden, so naturally I was keen to discover how the plants there fared. The truth is that not all of them are happy, which is just as it should be, otherwise how would we gauge any improvements?

I am particularly partial to pea tips, so I would normally look upon a pea trial as a potential grazing opportunity, but since most of the peas were mildew-ridden, I was saved the embarrassment of being caught eating the trial. I wouldn't have minded some of ‘Terrain’ though, it stood out like a beacon of health in a swamp of mildew. The contrast between the plants was astonishing. 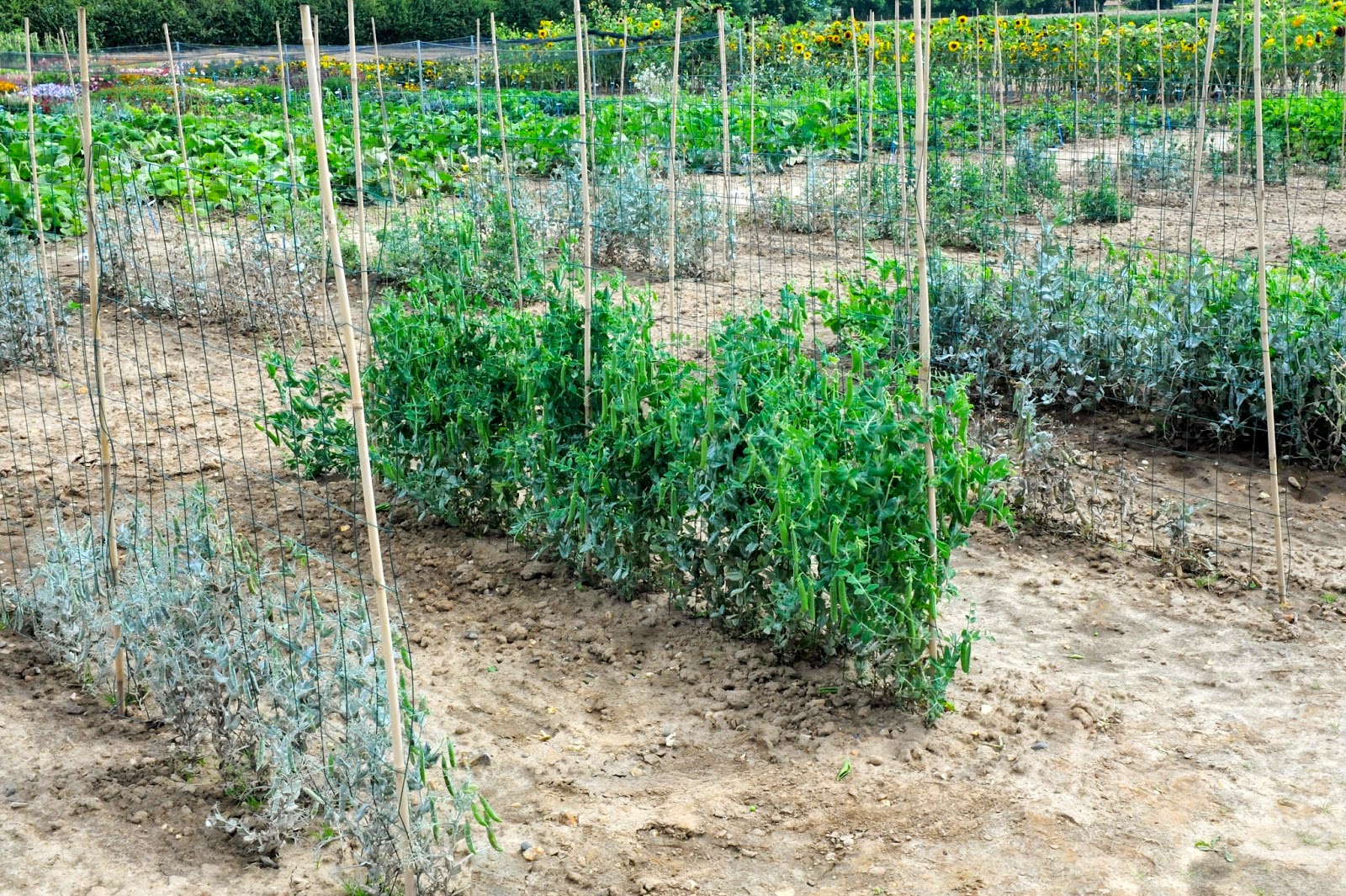 Strangely enough, an ornamental carrot really got me drooling. The frothy burgundy flowers of Daucus carota ‘Dara’ added that intriguing combination of darkness of colour and lightness in form to the border.  Although it is ornamental it produces a white edible root, but since it is a carrot, the flowers ought to be attractive to pollinators so despite my unseemly drooling, I won't be pulling up the roots for lunch. 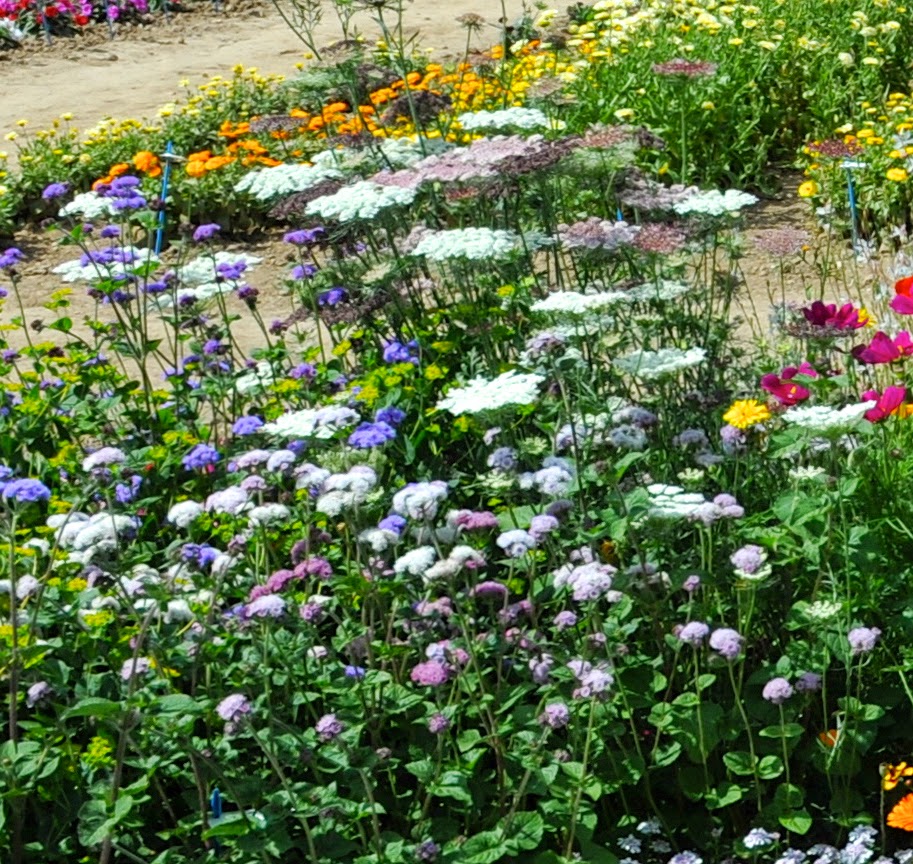 A plant which is definitely great for pollinators is Ageratum. I have spent the past few years feeling guilty that I don’t grow it as I sow only larger annuals. Ageratum houstonianum ‘Timeless Mixed’ which is new for 2015, is a taller version which means that I will be re-introducing Ageratum to my garden next year. It also makes a good cut flower, which will doubtless continue the Ageratum cycle of guilt when I steal stems from the pollinators to pop in a vase. 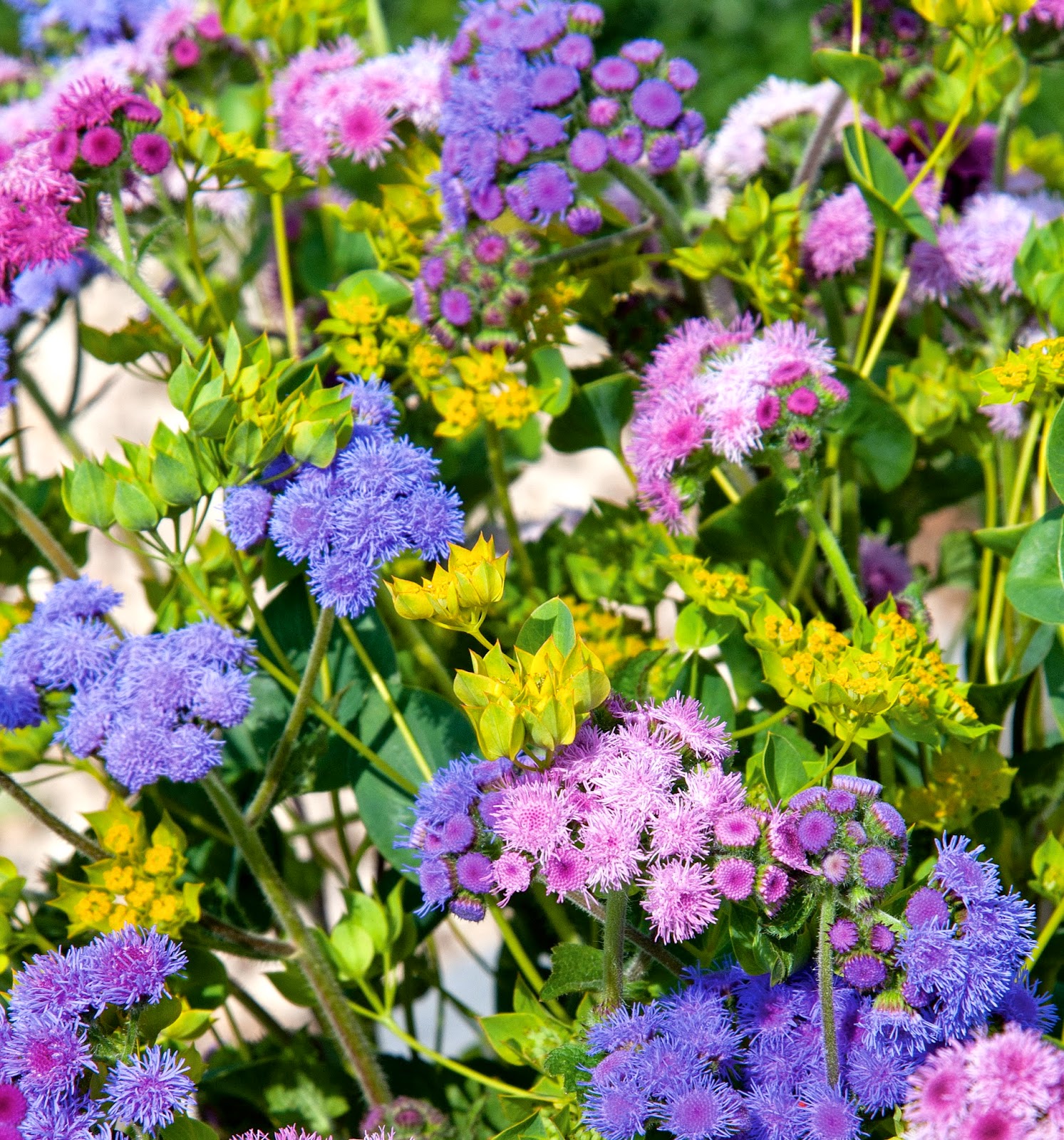 On a happier note, Cosmos bipinnatus ‘Cupcakes’ is simply beautiful. Even a cake-shy coeliac like me will want to see these cupcakes in the garden in 2016. It is just a pity we will have to wait for so long. 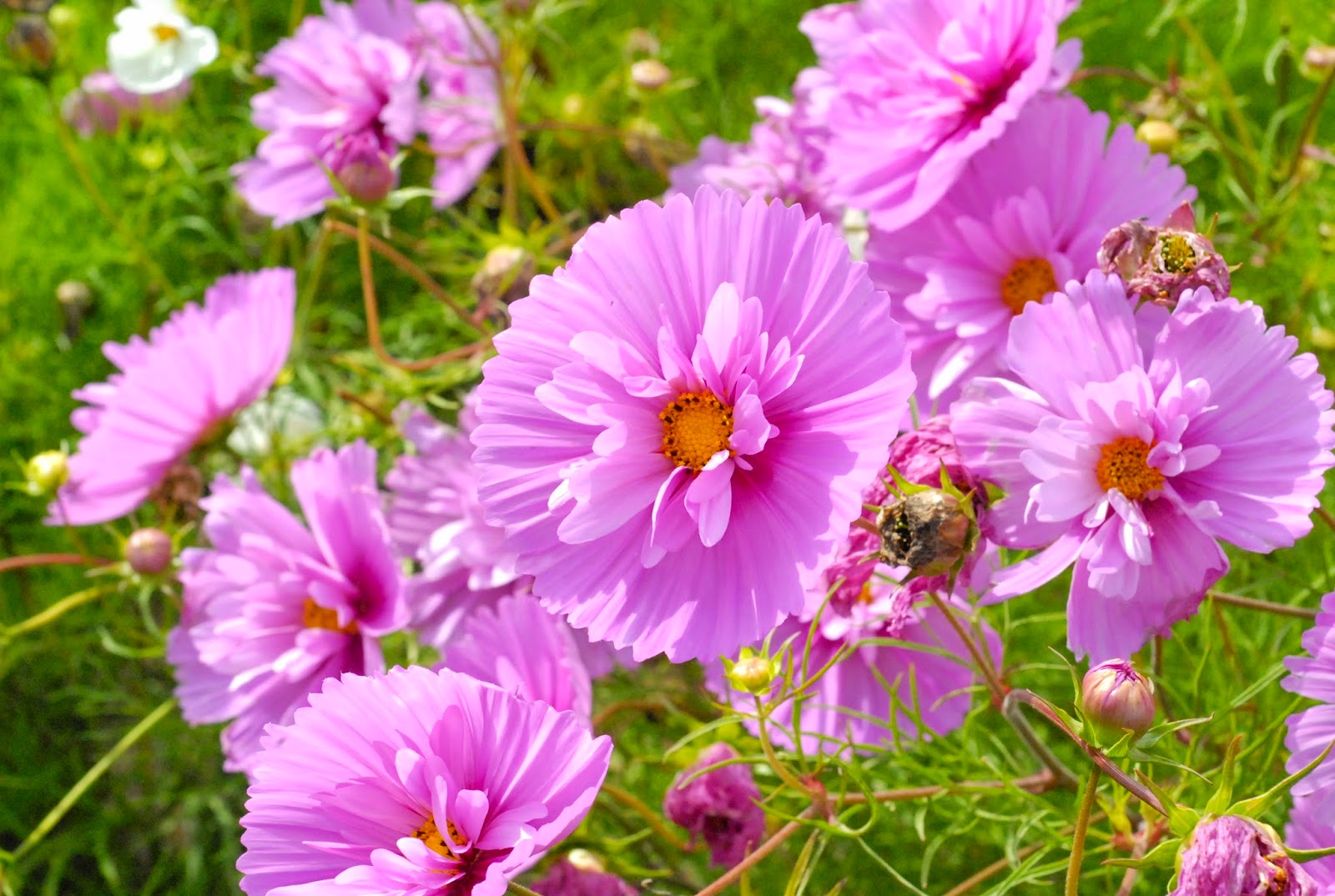 In the meantime, there are always tomatoes. In a blind taste test of five varieties, ‘sweet aperitif’ came out tops for me. It will certainly be making an appearance on my seed wish list for 2015. 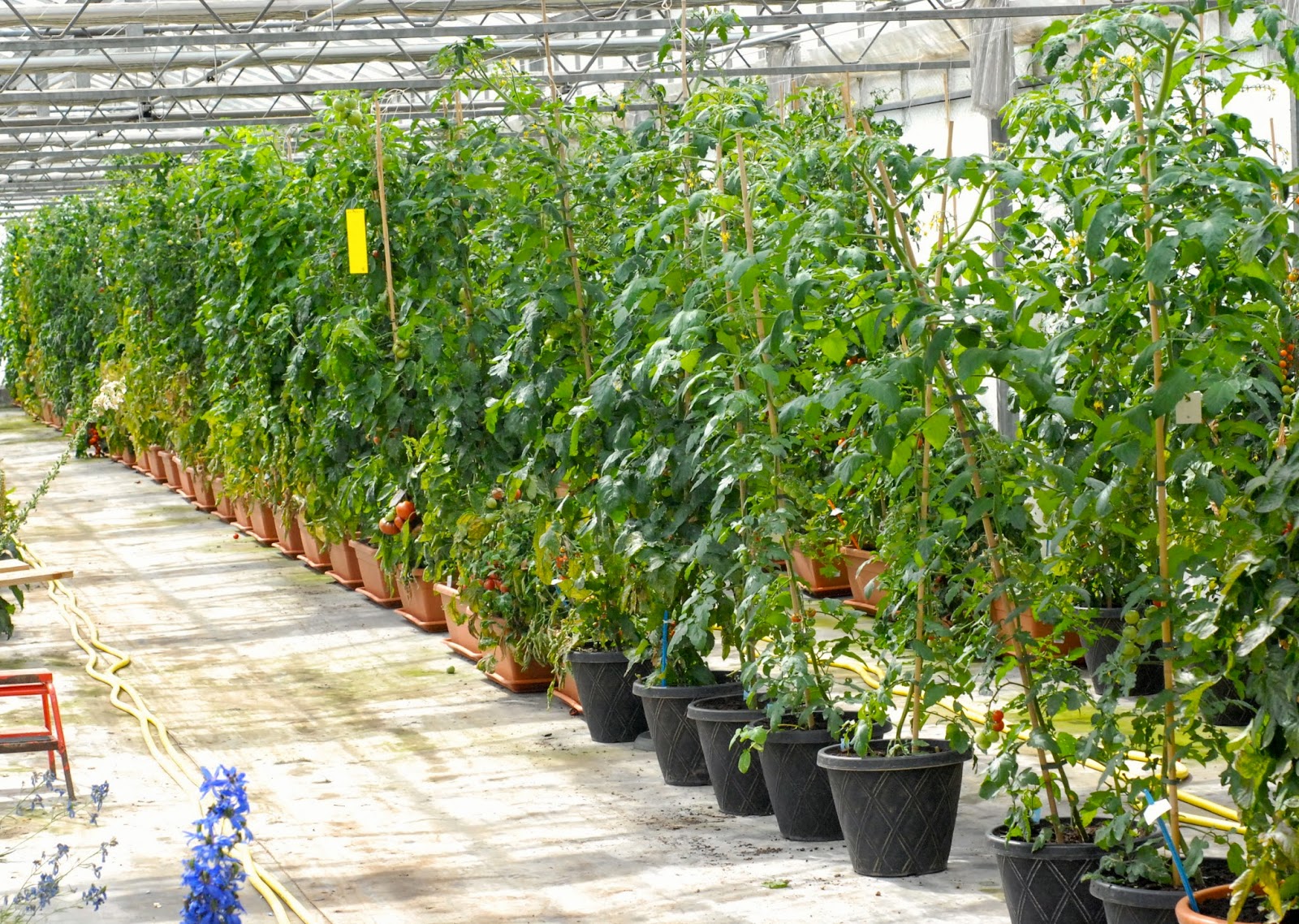 During the evening after the tour, it became apparent that my camera and computer were no longer happy to communicate with one another. My camera card was corrupt and my lap top was having none of it, so I was left pictureless. My thanks go to Thompson and Morgan for supplying the wonderful photos in this post. Thank you too to Michael Perry, Kris Collins and Hannah Ashwell for a fascinating tour coupled with timely cups of tea and the sweetest of pink blueberries to nibble on.

If you want to know more about Thompson and Morgan, they are at:
http://www.thompson-morgan.com/

If you want to read more about the day: