Prince Charles, The Smiths and a Passion for Podcasts

There was a time when I would have cranked up the volume on my car cassette player and sung my heart out to the strains of The Smiths. These days, although I am still prone to a spot of singalongaSmiths while driving, I am more likely to be clinging onto every word of a gardening podcast. My addiction to podcasts is interfering with my social life. Lingering post-lift conversations are a thing of the past as passengers are hastily disgorged from my vehicle so that I can settle selfishly into Gardeners' Question Time and similar treasures. 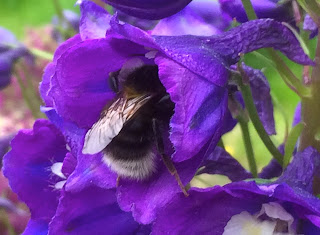 It was during one of these blissful solitary podcastly moments that I heard Prince Charles speaking about his love of delphiniums and how he would like to see battalions of them. Why wouldn't he? Three delphiniums make a handsome group, but a multitude of them yomping through the borders must be a marvellous thing. I prefer to think of them as a corps de ballet dancing through my garden rather than a battalion storming my barbecue area, but that aside, he and I are clearly of a single mind when it comes to beloved plants: more is most definitely more. 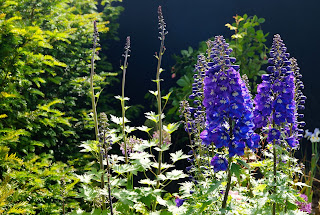 Taking care of mass Delphinium planting in the traditional way must be time-consuming. This doesn't scare me because (look away now if you are faint-hearted) I don’t stake my herbaceous perennials.... not even my delphiniums. I do, however, plant them in the least windy, most sheltered parts of the garden. After the storms which have battered us over the past few days, I had been expecting to see them slumped like a posse of teenagers over their mobile phones. I was wrong. These sturdy plants are dancers with serious core strength. They might not be as ramrod straight as those we see at flower shows, but they are most certainly standing tall and strutting their stuff, despite the occasional curved stem. Most importantly, bees love them. They are as popular as Nepeta with our buzzing friends at the moment. 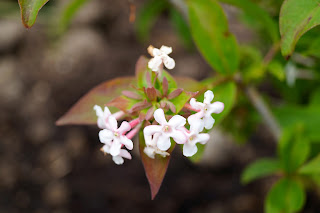 June borders might be a feast for the eyes, but while I was working in the garden a few days ago, I was bowled over by the most divine scent. Following my nose I found myself face-to-flower with Abelia mosanensis. Given that the roses are all belting out fragrance at the moment, the fact that quiet little Abelia flowers managed to eclipse them says much about the beauty and strength of its scent. First discovered in Korea, this 1.5 metre high shrub is a member of the honeysuckle family. I grow it in full sun, but it will take a little shade. Its light green leaves turn shades of red and orange in autumn and best of all, it is popular with butterflies and bees. Of all the myriad flowers deserving attention in June, a quiet, humble shrub with tiny blooms wins my heart. That is as shocking as telling the teenage me that there are more desirable plants than a limp Gladiolus which has been flailed about the stage by Morrissey.*

*Just in case you are too young to remember.... https://www.youtube.com/watch?v=1PV4eiDi12w

I am joining with http://www.maydreamsgardens.com/ for Garden Bloggers' Bloom Day. Why not head over there and see what is blooming in June around the globe?

Panicking about unplanted pumpkins and runner beans with nowhere to run is an annual event in my kitchen garden. Spring-sown plants scream to be released from their pots and I can almost hear the sighs of relief every time I pop one of these poor, desperate specimens into the soil. Although everything needs to be done yesterday and the weeds will be back tomorrow, I am always filled with hope at this time of year because (with the exception of a breakout of peach leaf curl and the ongoing battle with aphids) things have yet to go catastrophically wrong in the kitchen garden.

There were so many pollinators about in spring that I decided not to flutter around the fruit trees with my pollinating paintbrush pretending to be a bee. Unsurprisingly, the pollinators have done a fine job. Tiny embryonic fruits cluster on the branches of trees. They have yet to suffer the rigours of June drop, wasps and scab, so for the next week or two I shall remain optimistic that this autumn will be fuelled by wall-to-wall pies and crumbles.

The hens are clearly heeding the slug and snail warning this year as their pest patrols have been ruthless. Nothing gets in their way. Last week they uprooted part of a mirabelle hedge, three asparagus plants and picked every last one of the developing gooseberries. That's one crumble I won't be enjoying this summer.

Images of pumpkin plants being released from the prison of their pots and spreading their roots gratefully (if indeed pumpkins feel gratitude) into delicious soil only to be dragged from their moorings by an over-exuberant hen, have led me to protect all of my crops from the chickens and rethink the whole slug control issue.


Fortunately my family are squirrels. That is not to say that they spend their days clinging valiantly to bird feeders and chewing on the little plastic perches, but they could quite happily live off seeds and nuts - particularly pistachios. This is great news in light of the slug and snail invasion forecast. I buy unsalted pistachios and it makes my family happy. I take the shells, scatter them around the brassicas and the slugs and snails do a runner elsewhere (hopefully into the path of a peckish hen). It takes a lot of pistachios to mulch a broccoli bed, then again, if it were left to the chickens, the broccoli would be long gone.

While tomatoes and potatoes have yet to be blighted and courgette leaves exhibit no sign of mildew, we can remain optimistic for a bumper harvest. Early summer is a time for hope: hope that we won't be pulling pointless micro-celeriac again (what on earth happened to the celeriac last year?); hope that 2016 will be the year of the great butternut glut; and on a personal note, hope that my family's passion for pistachios will never wane.
Posted by Sarah Shoesmith at 08:48 38 comments: