Hilarius, the French physician, claimed that sniffing basil had led to a scorpion breeding in the brain of an acquaintance. I don't know about you, but I have buried my nose into the King of Herbs on many occasions and have never, as yet, noticed scorpions in my brain, breeding, or otherwise. 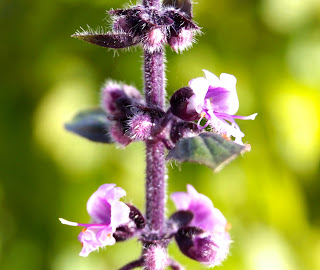 My passion for growing basil began in London where an Italian neighbour's garden was the source of a bountiful supply of fresh, juicy, sun-ripened tomatoes and delicious basil. He gave me my first basil plant and I quickly became hooked on growing culinary herbs. The thrill of harvesting fresh herbs never diminishes. I keep the plants close to the kitchen door so that I can grab a handful without bothering to put on my shoes. I also grow lettuce and tomatoes there in the hope that I might reach for salad instead of a chocolate bar (there is more chance of basil inducing brain-breeding scorpions).
Greeks and Romans would curse when they sowed basil seeds as they believed that it helped germination. When seeds stick to my hands rather than depositing themselves onto the compost, I call them names. It is hardly in the same league as a jolly good curse, so I have to take other precautions, such as sowing into modules, which does much to prevent death from damping off. I supplement home-sown insulted seeds with plant purchases if I see one which tickles my fancy. There are so many to choose from: cinnamon, lemon, lime, sweet or spice, Thai, Greek, Marseillais and Neopolitana, not forgetting the sumptuous purples, which may or may not be ruffled.
The key requirements of basil are warmth and well-drained, rich soil. I grow the plants in containers placed in sheltered corners which receive midday sun. Basil can be given to sulking if it goes to bed with wet feet, which is perfectly understandable (I don't like my feet to be cold, let alone wet), so water basil by noon.

One of my ongoing gardening challenges is to keep the kitchen supplied with fresh herbs over winter. Some, such as rosemary, are a doddle, but others, basil among them, are trickier, especially without a greenhouse. The solution might be 'African Blue' basil (Ocimum 'African Blue'), a half hardy perennial which is sterile. Since it doesn’t go to seed, I guess that it will not have that irritating habit of ceasing leaf production every time it sends up a flower stem, which is as well because the flowers are beautiful and delicious (I nibbled a few after I took the photos).
While 'African Blue' certainly tastes of basil, it does not have quite the same flavour as the more commonly grown annuals. It does, however, have the distinct advantage of being perennial, so it may very well supply me with leaves earlier than the annual forms if I get it into my sunny office before the first frosts. Imagine how much basil I will be sniffing at my desk! If the perennial basil experiment works and Hilarius was right, we may very well be facing a massive UK scorpion infestation in 2017. It will make a change from slugs.
Posted by Sarah Shoesmith at 12:14 40 comments: