There is a curious pattern of behaviour prevalent among gardeners whereby we garden for relaxation, yet we are incapable of sitting down and relaxing in our gardens because some little task will catch our attention and before we know it, we are gardening again. In our house it is known as Gardeners' Relaxation Aversion Syndrome (GRAS).

Christopher Columbus took the vital first step towards remedying GRAS in Europe by introducing the hammock. When lolling in a hammock, the gardener's eyes are diverted skywards and away from all those little gardening tasks and should a weed be detected, the effort of exiting a hammock in haste is enough to subdue any desire to spring into action. The indigenous people of Middle and South America called the hammock the “cradle of the gods”; I like to think of it as the “cradle of the gardener”.

My own research, involving rigorous relaxation in hammocks and more than a few extremely pleasant garden visits, suggests that the most effective treatment for GRAS involves a combination of hammock and orchard, so in the name of research (along with a passion for growing food and a love of orchards), I have been planting more fruit trees.

Last year I popped a medlar in the farmhouse garden. I did this because in the seventeenth century, Culpeper credited the medlar with "making joyful mothers". It's a pretty enough thing, but I can't say there has been a significant increase in maternal joy in our house. Perhaps that will change when it fruits. To add to the medlar, we now have apples, pears, plums, gages, cherries, mulberries and quince in the orchard. Anyone might think that Walt Disney was directing the planting, which was overseen by a wise owl

with a pheasant surveying posts 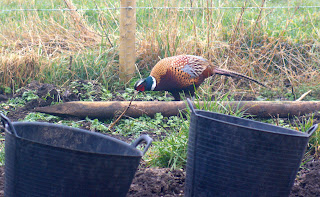 and Sprout doing the fetching and carrying....(and no, we didn’t whistle while we worked). 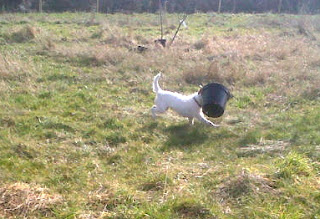 Planting trees is an investment in the future. These saplings are unlikely to support fruit for a year or two, let alone a hammock cradling a chocoholic welly-shod gardener, so I am going to plant a couple of sturdy, highly secured posts adorned with honeysuckle to support my cradle. Of course, the probability of finding my dream cradling device - the heated hammock - is about the same as the likelihood of the pheasant fitting on the seed feeder, but we shall both remain optimistic. 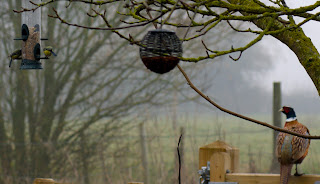 Come spring, I will lie in my hammock in an orchard filled with bird song and apple blossom. Mr and Mrs Pheasant and their jolly brood of young will parade past Sprout as he slumbers contentedly in the meadow grass under the watchful gaze of the wise owl. I will close my eyes and give thanks for Christopher Columbus' discovery and its soothing influence on GRAS, before leaping from my cradle in an ungainly fashion as GRAS reminds me that the lawn needs mowing. 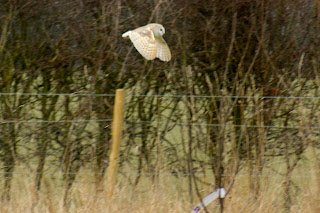 Posted by Sarah Shoesmith at 14:00