At last! The propagators are fired up and churning out seedlings on a daily basis; the cold frames, reassembled and reglazed after Storm Doris took them for a spin around the orchard, are stuffed to the gunnels; and the soil is warming up and looking as welcoming as it can, given its history. 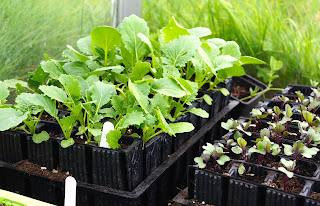 Living on a former farm in rural Norfolk means that I have land on which to grow food, but the soil is riddled with flint, chalk and hulking lumps of clay muddled with detritus from centuries of building and farming. Last winter, the notion of a flowerbed was redefined when I unearthed a bundle of bedsprings. Every time I pulled at a spring, it either stretched and refused to budge from the soil, or it attached itself to a fellow spring. Knitted together they were lethal and I found myself under attack from all sides as springs already exposed and languishing on the soil rose up and propelled themselves towards me. They made untangling a hosepipe look like child's play and the never-ending spaghetti of bindweed roots seem benign. I will never complain about weeding again (at least not this year). Whoever thought that it would be a good idea to bury a bed?
It is a few weeks since my last run-in with mingling springs. The pile of masonry dug from the soil continues to grow, but progress is being made and every so often I am treated to the delights of sowing into something akin to friable.
My favourite gardening task for a rainy day is the allocation of crops to their place in the kitchen garden. I stick to a basic rotation plan, but I like to mix things up in each bed because the kitchen garden is the one place where I feel free to experiment with different plant combinations every year. Of course, I could do that elsewhere in the garden, but an annual shift of perennial ornamentals is beyond me and I suspect that the plants would vote against the whole shenanigans by turning up their roots.
In a sense, there is a secondary rotation happening on my veggie plot because it is circular. Although there may be an argument for maximising light to individual beds, I arrange them in this way because I like the idea of sitting in the middle, surrounded by food. That said, the crop circles have been there for over half a decade and I have never sat down in the kitchen garden. 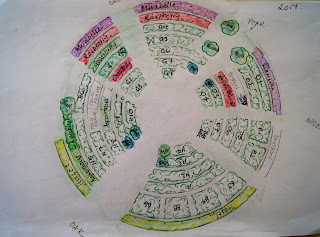 The area is bordered by fruit and nut hedging with views through the food to various focal points. One focal point is an oak, another is the pear tree under which I plan to put a seat on which I will probably never sit, but I do like to have a selection of benches to not sit on. Is this complicated arrangement of crops necessary? Of course not! It just amuses me to grow them in this way. Gardening should be fun. Crop circles make me smile.
Posted by Unknown at 14:12